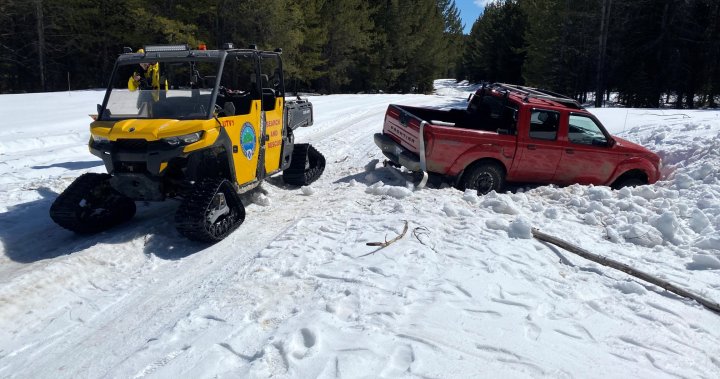 Central Okanagan Search and Rescue came to the aid of two stranded outdoor enthusiasts on Wednesday.

And both rescues took place in the James Lake area above East Kelowna.

According to COSAR, the first rescue took place around 9:15 a.m. and involved two people who had become stranded on Tuesday while driving in 4x4s from Ellison and towards Highway 33.

With their truck stuck, the two spent the night inside the vehicle. COSAR says the two tried to dig themselves out before texting a friend who called 911 on their behalf.

COSAR says the two were able to provide an accurate GPS position and an all-terrain utility vehicle (UTV) with tracks was dispatched. The stuck truck was 5.6 kilometers from the junction of Goudie Road and Highway 33.

The story continues under the ad

“The UTV team reached the stuck vehicle at 11:44 a.m., but were unable to locate the subjects,” COSAR said. “However, they were able to follow them through the snow and made contact soon after.

“The two, who were looking for cell service, were driven back to base and arrived at noon.”

But on the way out, COSAR said the UTV team encountered another group stranded a few miles away on James Lake Forest Service Road.

2:29
A British Columbia neighborhood owl, nicknamed ‘Whodini’, was rescued from a net

COSAR said the UTV team dropped off the first subjects at their base and then returned for the other subject.

The story continues under the ad

“COSAR would like to remind outdoor enthusiasts that we do not charge for rescue. If your safety is at risk, please call 911 and we will respond,” said lead researcher Brian Stainsby.

The task was COSAR’s 12th of the year and the third involving its new class of 2022 recruits.

3:42
BC senior rescued after nearly two weeks lost in the Caribbean Sea

BC senior rescued after nearly two weeks lost in the Caribbean Sea – March 19, 2022