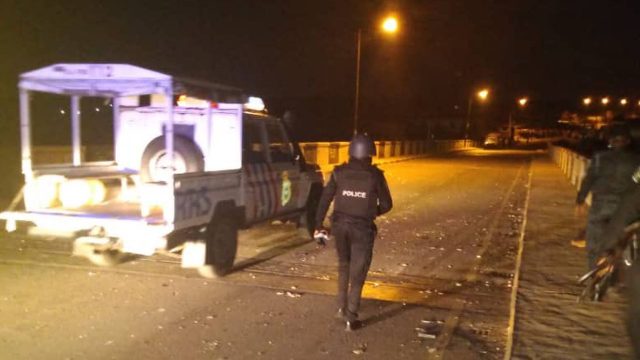 Speaking to IFJ, Okoli said she was in a Bolt vehicle on Akindele Road, Gbagada at around 10.30pm when the pair ordered the driver to stop. She said they asked for his driver’s license and other documents, which he presented.

She said she observed that the police did not seem satisfied after the driver presented his papers because he did not seem intimidated by their presence.

Okoli said she thought it would end there, but officers began to exchange words with the driver. She said an officer then charged over to where the driver parked the car and opened the door.

“He then said he wanted to search my bag. I asked him, for what reason? He had no reasonable answer but only muttered angrily. The driver told him not to yell at me, but he ignored.

Okoli said she got out of the car and presented her work ID to the officer who yelled at her. She said she then asked him to identify himself after seeing his ID, but he started swearing.

“He said, ‘What you’re doing is destroying people’s lives. This is your life purpose. But it is your brother in the village that you will destroy his life not mine.’ I asked him who he was, but he said, ‘look at that ant. Should I give you my identity?’ »

She said she insisted she would not allow him to search her bag until the officer identified himself. Later, she said, the policeman told her he wouldn’t let her go until a woman arrived on the scene or they went to the police station.

“I dropped my bag on the floor and asked him to search it, but he refused,” she said.

“He said he would wait for a female officer to search him or we would go to the station.

“I told him I would leave as soon as I had another ride, which I did. I left around 11:15 p.m. However, during the argument, he said he would call his daughter to slap me. I asked him why he didn’t have a tag on his shirt since he knew he was acting illegally. But he said I was threatening him.

When FIJ called SP Abimbola Ojo, the Divisional Police Officer (DPO) of Ifako Police Station, she said Okoli should come and see her at the station.

“Can she recognize the officers?” Ojo said. “Let her now meet me at the station. She should ask the DPO.