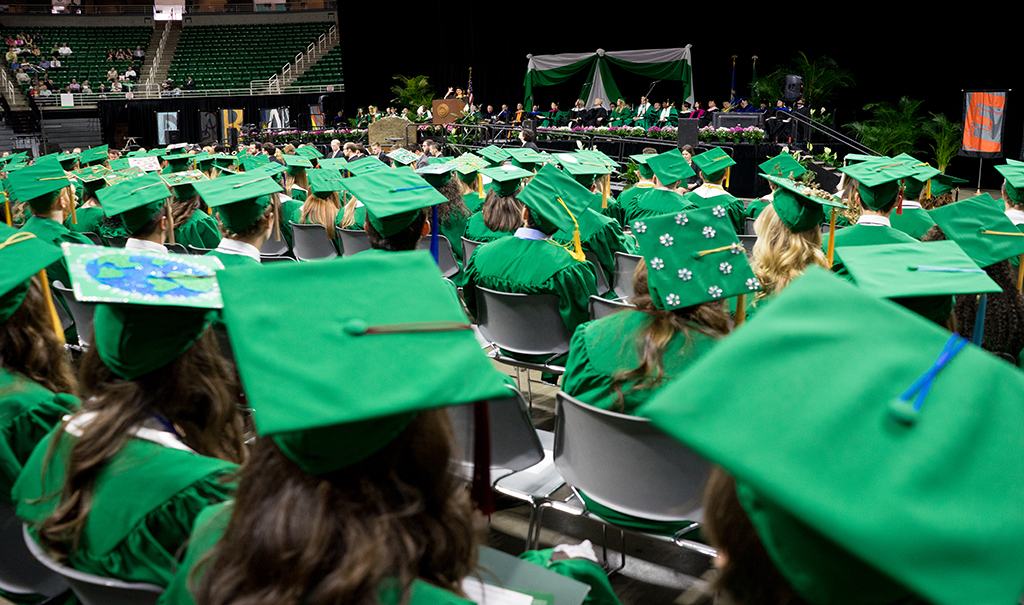 Extraordinary Spartan alumni will help celebrate the accomplishments of more than 9,200 Michigan State University graduates at the university’s commencement ceremonies on May 6.

MSU’s Spring 2022 start will revert to the pre-COVID pandemic format and will not require masks or capacity restrictions — thanks, in large part, to the tens of thousands of Spartans on campus who have been vaccinated and strengthened.

Linda Hubbard, MSU alumnus and President and COO of Carhartt Inc., will help kick off graduation season at 9 a.m., speaking to master’s and specialist’s degree holders in education. She will receive an honorary doctorate of commerce.

At 1 p.m., Steve Smith, MSU’s all-time leading scorer, NBA No. 1 draft pick and Olympic gold medalist, will address undergraduate degree recipients at their convocation and will receive an honorary doctorate in education.

“MSU has an extensive network of Spartans who have achieved remarkable success around the world – an alumni network of more than half a million people,” said President Samuel L. Stanley Jr., MD “As our next generation of Spartan alumni join this network, they will find leaders ready to help them reach their full potential – leaders like Linda, Steve and Ronald.

Hubbard, Smith and Goldsberry will be joined by Fall 2020 and Spring 2021 virtual kickoff speakers, including Jennifer Gilbert, Director and Board Member of Rocket Companies Inc., and Amber Engine Founder, Dan Gilbert , founder and president of Rocket Companies, and Wendy’s CEO Todd Penegor for presenting their honorary degrees in person.

The ceremonies begin on May 5 and continue until May 14. All ceremonies will be held at the Jack Breslin Student Events Center, 534 Birch Road or the Wharton Center Great Hall, 750 E. Shaw Lane. The events will be broadcast live and can be viewed via MSU launch site. Twitter users are encouraged to follow them using #SpartansWill.

For the safety of participants, no bags or purses will be allowed at the Breslin Center for the opening ceremonies. Cameras and camcorders are allowed, but cases are prohibited. No food or drink – including bottled water – will be permitted, and this applies to graduates, guests, and faculty. The Breslin Center will be offering a limited concessions menu during the ceremonies. Additional prohibited items include noisemakers, selfie sticks, pets, signs, and weapons of any shape. The Breslin Center is a smoke-free facility.

Metal detectors will screen all attendees, so please plan accordingly.

Biographies of speakers and honorary degree recipients are provided below.

Ronald Goldberry
Ronald Goldsberry is the former global vice president and general manager of global customer service operations and vice president of global business strategy for Ford Motor Co., where he is credited with refreshing global aftermarket strategies and Ford service that have contributed to Ford’s success. Goldsberry has also dedicated his life to public service, having served as a Captain in the United States Army and volunteering his time on the boards of several corporations, including the Detroit Financial Advisory Board, Rockefeller Foundation, Automotive Hall of Fame, the MSU Foundation and many other prestigious foundations.

Linda Hubbard
Linda Hubbard is president and chief operating officer of Michigan-based workwear company Carhartt Inc. and is responsible for leading the development and execution of the company’s business plan and all company operations. business. She also sits on its Board of Directors as Secretary/Treasurer and Administrator. Hubbard also serves on the board of directors of the Detroit branch of the Federal Reserve Bank of Chicago, the board of directors of Hibbett Sports, and was an active MSU alumnus, most recently serving as immediate past president of the Eli Broad College of Business Advisory. Advising and participating in the university’s presidential search that hosted President Stanley on campus.

Hubbard received a bachelor’s degree in accounting from the Eli Broad College of Business at MSU, is a Chartered Public Accountant and a Certified Global Management Accountant.

Steve Smith
Steve Smith is a sports analyst at Turner Sports/NBA TV, CNN and the Big Ten Network. He is also Vice President of the NSORO Education Foundation, helping to provide education for young people coming out of foster care. Prior to his work with the foundation, Smith was an NBA first-round pick for the Miami Heat. He won several accolades for his accomplishments in the NBA, including a championship ring with the San Antonio Spurs, a gold medal at the 1994 FIBA ​​World Championships, and a second gold medal in the NBA. the 2000 US Olympic basketball team in Sydney, Australia.

Smith earned a Bachelor of Arts in Interdisciplinary Social Science Studies from MSU in 1991.

Dan Gilbert
Dan Gilbert is the Founder and President of Rocket Companies Inc., a Detroit-based company that provides simple, fast, and reliable digital solutions for complex transactions. Gilbert is also the founder and chairman of Quicken Loans, the nation’s largest mortgage lender; the founder and chairman of the Rock Family of Companies, a portfolio of technology companies and real estate investments; and president of the Cleveland Cavaliers of the National Basketball Association.

Dan Gilbert earned a bachelor’s degree from MSU in 1983 in telecommunications and a Juris Doctor degree from Wayne State University.

Jennifer Gilbert
In addition to being a director and board member of Rocket Companies, Jennifer Gilbert is the founder of Amber Engine, a furniture services and solutions technology company. She also founded POPHOUSE, a Detroit-based design studio focused on creating strategic, unconventional, and human-centered spaces. Additionally, Jennifer Gilbert is President of NF Forward and Chair of the Board of Governors of the Cranbrook Academy of Art and Art Museum.

Jennifer Gilbert earned a bachelor’s degree from MSU in interior design in 1990.

Todd Penegor
Penegor became president and CEO of The Wendy’s Co. in 2016 after joining the organization in 2013 as senior vice president and chief financial officer. Prior to that, he held various leadership positions at Kellogg Co. and Ford Motor Co. Penegor serves on the board of directors for the Dave Thomas Foundation for Adoption and as a member of the financial advisory board for the Eli Broad College of Business.

A Michigan native, Penegor earned a Bachelor of Arts in Accounting in 1987 and an MBA in Finance in 1989, both from MSU.