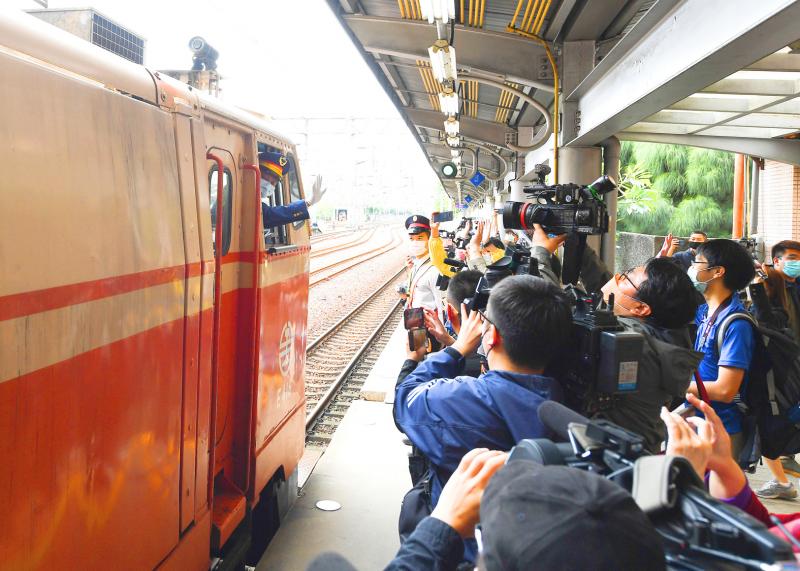 Train enthusiasts across the country gathered at train stations in Hualien and New Taipei City yesterday to bid farewell to the last of the Fu-hsing semi-express trains, once the workhorse of China’s passenger rail system. Taiwan.

Fu-hsing Semi-Express No. 605 was the last of its kind to embark on a journey when it departed Hualien Station at 6:05 a.m. for a three-hour, 51-minute journey to Shulin Station in New Taipei City.

Several train enthusiasts and residents of Hualien gathered at the departure station to take photos and see the locomotive on the left adorned with commemorative decorations.

Other people gathered at Shulin Station to watch the train make its final stop at 9:56 a.m. and bid farewell to the Fu-hsing series.

A train enthusiast, surnamed Lai (賴), said he took the day off to ride the train one last time with his wife and two children, after living with Fu-hsing series trains all his life.

Due to the trains’ unique braking system, it takes experience and skill to drive them, the train driver said, while his conductor said he was proud and sad to see older rolling stock than take his final bow.

The Taiwan Railway Administration (TRA) sold 300 NT$150 commemorative tickets for the Hualien section at Xincheng Taroko Station of the train’s last journey, which included the official validation of the TRA.

Launched in early 1981, the Fu-hsing series were the first domestically built trains and the first equipped with air conditioning.

Once ubiquitous throughout the country, Fu-hsing trains have been phased out and replaced with more modern rolling stock and high-speed trains on most TRA routes.

All train services would be taken over by new and existing EMU900 and EMU500 trains, as well as Tze-Chiang Limited Express trains following minor adjustments to the TRA timetable which came into effect yesterday.

The change is part of a major TRA fleet modernization that included the withdrawal on Monday of the EMU1200 train used on some Ziqiang Limited Express routes, the TRA said.

Phasing out older models would allow the TRA to fully utilize its newly acquired EMU3000 trains in Japan and the South Korean-made EMU900 trains that entered service last year.

The bulk of the Fu-hsing trains are to be demolished except for some passenger cars which would be salvaged and reused for use on the South Link Line, the TRA said.

Comments will be moderated. Keep comments relevant to the article. Remarks containing abusive and obscene language, personal attacks of any kind or promotion will be removed and the user banned. The final decision will be at the discretion of The Taipei Times.