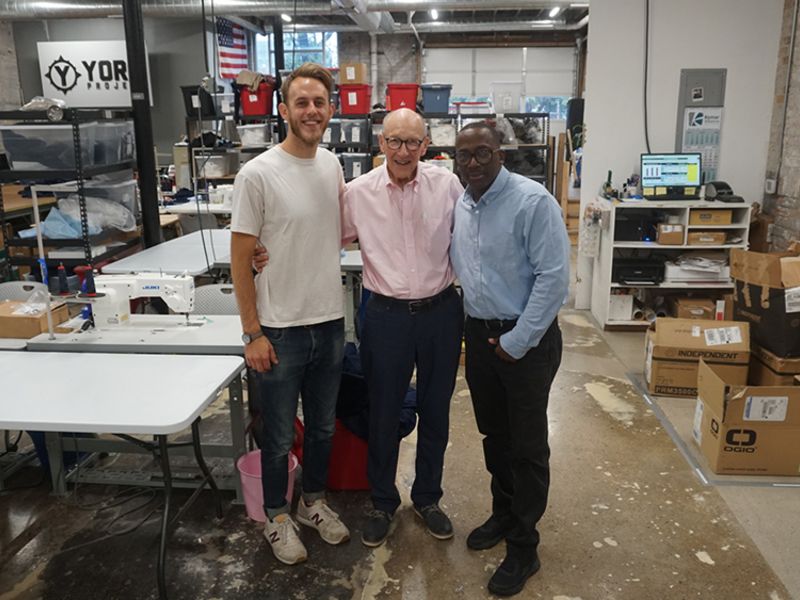 Barry Demp was a business coach for 29 years after a career spanning more than 12 years in sales, marketing and advertising with the now defunct pharmaceutical company Upjohn. Demp, which offers coaching to business owners and executives, as well as lawyers, accountants, bankers and financial advisers, bills for his services. His program is tailored to the needs of each client, he said. Demp did not disclose the average cost of his packages, but said six months of coaching for an executive would cost what a student pays for a college semester.

“Everyone is looking to move forward and improve, personally and professionally,” Demp said of his clients. “What we do, as a coach and a client, is get to the bottom of what they want to work on, which is usually every aspect of their life: career, time management, personal relationships. They want to be more. aware of where they are in life, where they are headed. We create a roadmap of where they want to go, and that gets them there faster than if they were alone. “

Demp, whose client list includes former ThyssenKrupp USA CEO Deric Righter, is aware that the cost of his services may be more than some business owners can afford. He is familiar with programs like SCORE and thinks the nonprofit provides solid service.

Williams, whose business so far this year has generated around $ 150,000 in revenue, said he would not have asked for coaching if there had been a price attached. “There are enough people out there with the information you need if you’re looking for it,” he said.

Broner’s understanding of how stressful entrepreneurship can be led him to SCORE. “I started volunteering only on Fridays, but didn’t feel like I was doing enough,” he said. “I’m having fun. I feel like I’m having an impact.”

SCORE also has an impact.

The Herndon, Virginia-based organization is funded in part by the US Small Business Association. Locally, SCORE receives donations from private foundations and corporate donors, the details of which are subject to confidentiality agreements, according to Tom Garner, co-chair of SCORE Southeast Michigan.

All federal and private grants and donations are reinvested in SCORE free programming and services. Coaching services are provided by a team of 80 local volunteers. So far, the chapter for fiscal 2021 has registered more than 3,200 mentoring sessions and more than 2,800 workshop participants, Garner said.

Josh York, founder of Detroit-based apparel maker Soft Goods, is one of those small business owners who participated in mentoring sessions this year. York, 28, started his business in 2017 after a four-year period of screen printing T-shirts in his basement.

York, who previously worked in event marketing for Huntington Bank and as an Assistant Procurement Specialist for Abercrombie & Fitch, recognized last year that his business had growth potential and needed improvement. ‘an experienced person to facilitate this growth.

“The next oldest person on our team is 26. We are all very young,” said York, whose company had been present for three years at the Twelve Oaks shopping center in Novi. “When you’re young and trying to run a business you don’t know what you don’t know. I needed to bring in someone with experience who would point out some things that I maybe don’t even think about. not.”

The young business owner said he felt the need to get his hands on as many things as possible, which hurt the business.

Broner pushes her clients to focus on what they do best before embarking on new ventures. York admits Broner isn’t the first person to impart this wisdom to him.

“Every mentor I’ve had in business has told me to pick one thing and do it right, and it’s only after you’ve done that thing perfectly that you should develop yourself,” York said. “After doing it the hard way for a while, we changed focus. I have a good team focused on the laser. I let my mind wander and they brought me back. was young and stupid and I didn’t know what I didn’t know. “
York, who participated but did not complete the Goldman Sachs 10,000 Small Business Program, was briefed on SCORE last year by a previous advisor. This person called Broner the best business coach in town. Their relationship began when Soft Goods began producing masks and gowns at the start of the coronavirus pandemic. Soft Goods, which has seven employees, had 21 employees on site to help with the production of the new items.

“The wealth of knowledge that (Broner) brings has made a big difference,” said York, whose company so far this year has generated nearly $ 1 million in revenue. “I didn’t even know (SCORE) existed. At the time, we were going through huge changes as a company, adding more people, growing up. I really needed some guidance then. “

Williams and York said coaching made them better business owners.

“It really helps to have someone to call and to bounce different ideas,” Williams said. “With his own business interests, (Broner) has been there and he knows entrepreneurship can be a lonely road.”

“(Broner’s training) made me a more complete business owner,” York said. “With any business, there is always a million things you don’t see coming. Having someone who’s been through what you’ve got, but also seen things that you haven’t seen, it is priceless. “

Service can be invaluable, but the pairing of coach and client is not always done in heaven.

Broner and Demp said they ended relationships with customers early in the process. Demp said it was for clients to see coaching as an investment in their future.

“Working with a business coach usually gives great results,” he said. (Former Ford Motor Co. CEO Alan Mulally) worked with a business coach – Marshall Goldsmith. (Mulally) attributed some of his success as CEO to this collaboration. I like to say that, if you’re willing to invest in your undergraduate education, which some people pay hundreds of thousands of dollars for, having a business coach is worth it. “
For Williams, obtaining the services of an accountant has increased income. The accountant also has a ledger showing which products are selling at a high rate. Broner last year also helped Williams seek financial aid during the pandemic.

“You have to submit a lot of financial data to get government grants and loans,” said Williams, whose company received a payroll protection program loan of $ 11,468 in 2020. “Timing was essential for to be able to apply for and get those funds. Without (Broner’s) guidance, I wouldn’t even have tried to get the money and we might have gone bankrupt. “

Broner has put York in touch with potential undisclosed partners with whom he hopes to make deals.

“(Broner) always comes to us with new sales ideas – things that are like you and that you don’t think of,” York said. “For upselling customers, (Broner) told me that some of our customers get items from other places they could get from us. He helped us in terms of finding ways to bring in new ones. offers to the table. (Broner) has pulled into other mentors from other areas like manufacturing so we can be better at it. We get a lot of help that we wouldn’t otherwise have. “

This assistance will continue. There is no end date for Broner’s services, he said.

“I have people that I’ve been coaching for 10 years. I don’t talk to them every week, but I keep in touch,” Broner said. “It usually turns out to be a friendship. You develop a good rapport. I had someone call me who I haven’t spoken to for two years. I’m always available.”